Never Miss a Chance to Do the Most Good

Please enter your name, email and zip code below to sign up!

From Addict to Advocate: Dan's Story

Dan Guhl had to overcome a lot at an early age. His father was an alcoholic and an addict, and his stepfather more of the same. As he grew up, he lacked positive male role models and quickly fell into the trap of drugs and alcohol.

After serving in the military in the 80s, Dan hitchhiked cross-country, doing drugs and committing petty crimes as he went. At one point, he was doing meth and living in a refrigerator box. He robbed, stole, and took advantage of anyone to get the drugs he needed.

Eventually, Dan’s crimes caught up with him and he was arrested. Before the sentencing, Dan prayed, asking God to deliver him from crimes, but God’s answer was a year-long sentence in county jail. The judge told him if he ever saw Dan again he’d put him away for 3-5 years. This was his last chance.

Dan was released from jail nine months later. Though he was supposed to immediately enter a program to get help for his addiction, he absconded to Portland. The next day he saw The Salvation Army shield, and he knew it was time to get help.

Rising Through the Ranks

When Dan entered the Adult Rehabilitation Program, he was (as he fondly refers to it) an “EGR” person or “Extra Grace Required” person. In fact, until then Dan thought he had done too many sinful things to be forgiven. But he was wrong.

After about three months in The Salvation Army rehabilitation program, things started to change for Dan; he realized God wanted a relationship with him, even in his brokenness. For the first time in his life, he was surrounded by men who were positive role models and wanted to mentor him so he knew what it meant to be a real man. They gave him a second chance, and the result was humbling: 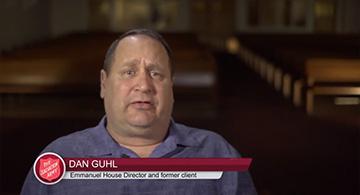 “They let me be me until I learned to be a better person. There was a lot of stuff I was still holding on to and they were patient and they were loving and kind, and that’s the vision you want to have from somebody who is Christ-like. I knew the second chance that they’d given me---a lot of people or places wouldn’t have done that. Plus I met a lot of really nice people who helped guide me. A lot of male role models I didn’t have growing up and they really inspired me and helped me through some really tough times during my first few years of recovery.”

With his tumultuous record, Dan was pretty unhireable, but a Lieutenant at The Salvation Army decided to hire him as a trailer attendant. After that, he started working in the Shipping & Receiving department at the Portland Adult Rehabilitation Center (ARC). Next, he got to see the other side of The Salvation Army when he worked at their church as a janitor. While there, he met and married his wife.

Ten years into his recovery, Dan kept rising up the ranks, taking on new responsibilities, and helping people like him break the chains of addiction and find Jesus in the process. He worked as a cook, lead maintenance worker, and ever worked with street ministries to bring food, talk, and pray with people suffering from addictions.

From Addict to Advocate

Dan is now the Director of The Emmanuel House, our homeless shelter and soup kitchen that’s been serving the Silicon Valley for decades. There, he wears many hats, encouraging men in the program, serving up food as cook, and leading Bible studies. His wife is never too far away, as she also works at The Salvation Army Silicon Valley as a receptionist.

Ever since he gave his life and will to God, life has never been the same. That said, Dan has found meaning in the struggles he went through as a young man, and if he could do it all over again he would...to glorify God with his story and experiences:

“I wouldn’t change one thing because I glorify God in what God has helped me get through---he didn’t help me get out of trouble, but he helped me get through it.... It has helped make me a better person but my past defines who I am today and it helps me be a better person to show other people where they can go from where they’re at. With how far down I was, if God can help me through this he can help anyone through this. God doesn’t waste our hurt or our sorrow. If we glorify him in everything he’s helped us get through then we’re okay… he wants us to glorify him through our actions.”

Though Dan’s been sober for 20 of years, working at Emmanuel House and helping addicts on a daily basis has a sobering effect:

“This place keeps me sober. I see the addiction run rampant in people all day long. And I think ‘Man, I don’t miss that.’ So just as much as I’m helping people stay sober, it helps me stay sober too...I have my faith, and my wife and my family. I have my spirituality. And those are things I wouldn’t change for the world.”

Why The Salvation Army?

If you've been impacted by Dan's story, we would love to partner with you to end addiction, homelessness, and hunger in the Silicon Valley. The Emmanuel House, our soup kitchen and homeless shelter, has been serving San Jose since 1967. Each week, we provide hundreds of meals for hungry people all across the city. Our Adult Rehabilitation Center is also located in San Jose, where we help residents combat their addictions, build the work and social skills they need to re-enter the workforce, and restore families that have been disrupted due to substance abuse.

Click here to donate or view our ongoing volunteer opportunities.

Subscribe to receive more stories, directly in your inbox!

A gift to The Salvation Army helps someone in your community.

Do Good in your community

Join us throughout the week for worship, fellowship, Bible study, meals, community service and fun.